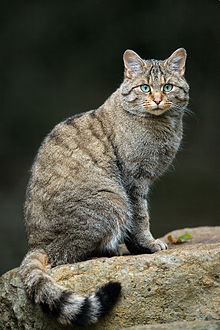 The European wildcat (Felis silvestris silvestris) is the nominate subspecies of the wildcat that inhabits forests of Western, Southern, Central and Eastern Europe up to the Caucasus Mountains. It is absent in Scandinavia and has been extirpated in England and Wales.

In France and Italy, the European wildcat is predominantly nocturnal, but also active in the daytime when undisturbed by human activities. [Credit: Wikipedia]